As we count down the final days of 2013, the inevitable year-in-review stories start popping up. Two recent ones caught my eye, as much for what they said as for what they left out.

In RH Reality Check’s Top Pro-Choice Heroes of 2013, we are treated to a diverse round-up of “sheroes” who put it on the line for choice this past year. Some names you know well by now — Wendy Davis and Kirsten Gillibrand, for instance — and some folks you might have missed but are worthy of attention, including Tanya Fields and Tiana Parker.

2013 not only saw a number of pro-choice successes but also countless hard-working activists and allies who, against tremendous odds, put in time and energy to advance reproductive rights and health and ensure the safety of women and girls of all backgrounds. We salute these heroes for all that they do each and every day to make certain that women and their families have the resources they need to live happy, healthy lives. Here is a far from comprehensive list of some of those brave women and men. 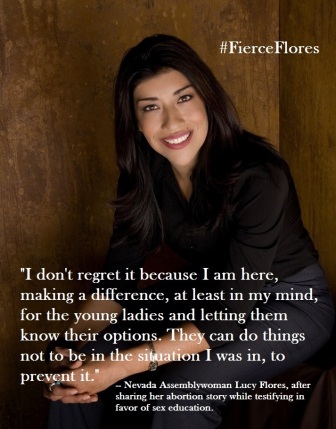 One hero definitely missing is Assemblywoman Lucy Flores, Nevada’s first Latina assemblywoman, who faced threats of violence after talking publicly about having an abortion. Her intention was to shine a light on the lack of sex education she and her sisters received growing up in a poor, Hispanic household. The firestorm that erupted after her admission not only turned up the heat considerably on an already contentious issue at the Nevada Legislature (a bill for comprehensive sex education), but resulted in the creation of the #fierceflores hashtag and meme (created by your humble Siren) that became a national story and a rallying cry for organizations including Planned Parenthood, the National Women’s Law Center, the Center for Reproductive Rights, and many more who launched memes of their own with Flores’ words and image.

But, hey, RH Reality Check is a national news outlet. Even though they graciously shared my post on Flores, I can’t expect them to remember every hot pro-choice story this year. There were many!

Sure, Ralston has collected a mighty fine mix of some of the biggest stories in Nevada — from web gaming to cop-gate to Steven Brooks’ expulsion. I would call it the definitive mix, especially considering the lush “honorable mentions” section, if it were not for one glaring omission: Lucy Flores.

Now, don’t get me wrong. Even now after the whole #fierceflores thing, I don’t know the assemblywoman personally. I’m not in her district. So, I don’t have any kind of direct connection to her, her career, or her future (like whether or not Senate Majority Leader Harry Reid tanked her shot at the lieutenant governor’s seat).

Seriously though, it’s hard to deny that Flores’ abortion testimony and the events that came after were not an important political story this year. The Huffington Post, New York Daily News, Policy Mic, and The Daily Mail all did stories on the fall-out from and threats made against her because of her testimony. It made international headlines. I’m pretty sure that’s at least one of the benchmarks of a big news story.

And then there was AB230, the comprehensive sex education bill, itself — including the spectacular clusterfuck that was its demise. True, you do call out the ineptitude of Democratic leadership at the Legislature as one of your top 10 stories, but come on Jon, AB230 deserves at least a mention in the list of ways the Dems dropped the ball.

Truthfully, I love both of these media sources. I read RH Reality Check and Ralston every day. And I will keep reading them in 2014. As a one-woman media show of my own, I know how hard it can be to stay on top of every story and remember every last detail of everything that has happened in a year. No year-in-review is ever perfect. But both of these would be far more comprehensive by including a mention of the wreckage of AB230 and the fortitude of Lucy Flores.

Update: It’s worth noting that ThinkProgress did include Flores in their round-up of top reproductive rights stories of 2013.

Want more SCS? Follow me on Facebook and Twitter! Keep up with fresh posts automatically by signing up for free email alerts! (PS: A Kindle subscription makes a great stocking stuffer!)