*See below for updates and most recent news* 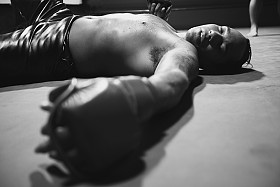 In November 2011 I became the spokesperson of a coalition of individuals and organizations who were seeking to bring change to the Ultimate Fighting Championship (UFC) by demanding that they address a spate of hate speech, rape jokes, and more by enacting a code of conduct, similar to those enacted by every other major sport franchise.

My involvement began after a rape-joke tweet by fighter Forrest Griffin. The act was met without comment by UFC officials or CEO Dana White. In fact, Griffin later received a bonus for effective use of social media. In short order, there were more and more offensive tweets and public comments from fighters and White himself, joking about rape and the sexual abuse scandal at Penn State. Meanwhile, they had a legacy of anti-gay public remarks and outbursts.

As a survivor of sexual abuse, this issue is personal to me. The only way we change attitudes about sexual violence is through public discourse and to act as a society to stop it. And there is evidence that awareness campaigns and calls for greater societal standards does change minds — just look at the evolution of “wife beating” to domestic violence and the impact of the Violence Against Women Act.

Joking about rape and off-color remarks about sexual violence are not only offensive, but they are deeply hurtful to those who have survived such experiences. It can be a trigger for survivors to feel a whole host of difficult emotions, including anger, sadness, depression, shame, and frustration. For society as a whole, it is a terrible marker for the pervasiveness of rape culture and its bullying effect on the hearts and minds of women, men, girls, boys, transgendered individuals, LGBT people, and others. Joking about rape and sexual abuse is an admission that taking away someone’s power is not only “funny” but somehow acceptable and even encouraged. (This places a cultural expectation on what it means to be a “real man” just as much as it does to be a woman.) This kind of thinking plays into slut-shaming, in which girls are ridiculed and, in fact, shamed for alleged sexual escapades.

But that’s not the only reason to support this campaign. The UFC has a long history of anti-LGBT remarks made in public forums, including on twitter and in self-made youtube videos. Using gay slurs is another form of bullying and these UFC fighters are considered role models and are idolized by thousands of fans. Just like when Kobe Bryant got fined by the NBA for using the f-word on the basketball court, the UFC needs a code of conduct in place to take swift action when incidents like this occur.

If you feel like me, that it’s time the UFC grew up and enacted a code of conduct, please take a moment now and sign this petition.

The following organizations and groups have officially signed on in support:

Catch up on the SCS campaign here:

***UPDATE: The UFC announces a code of conduct at the end of 2012 and uses it to discipline a fighter for transphobic comments in April 2013.***

12 thoughts on “UFC Code of Conduct”