I suppose I should have seen it coming. As I sat listening to Nevada Assemblywoman Lucy Flores’ compelling, raw testimony during an April 1 hearing on a comprehensive sex education bill (AB230), I should have paid closer attention to the gasps of horror that came from the opposing side. I should have recognized it as the epicenter of a grand shock-wave that had yet to hit. Because that was the moment when Flores, Nevada’s first Latina assemblywoman, announced publicly for the first time that she had an abortion at age 16.

“I’m going to say something I’ve never said publicly before, because — Why not? I’ve been open about everything else?” Flores tearfully said as she began to tell the story of her unplanned pregnancy. “I had six other sisters, all of them became pregnant in their teens — all of them. One was 14 years old when she got pregnant with twins. That is what I had to learn from.”

When Flores found herself pregnant at 16, she went to her father to get money to have an abortion because, she said, she saw how difficult circumstances were for her sisters, already mothers so young. Flores’ story is just another thread in an amazing story of redemption that found a former gang member turn good by getting her GED, then law degree, and who now works as a state legislator. She credits her parole officer with helping change the course of her life, already marked by a juvenile record.

In her testimony on AB230, Flores described being raised — one of 13 children — by a single father after her mother walked out when she was nine. Flores described the hardship that she saw her sisters go through as teen parents and said she was determined to change the cycle of poverty so common among young parents. In fact, a child of teen parents is nine times more likely to live in poverty.

“I had an abortion because I didn’t have access to birth control, or even an understanding of what that meant,” Flores said. “I didn’t even understand that my worth did not come from men, or sex with men, trying to fill up a hole in me from so much pain.”

It was a surprisingly sincere moment from a politician who risked public scrutiny in order to champion an update to Nevada’s current, abstinence-based sex education law, originally passed in 1980. With the Silver State ranking fourth in teen pregnancies (down from second in the nation just a few years ago), according to Guttmacher Institute, a lot is riding on this second bid in as many sessions of the Nevada Legislature to get medically accurate, age-appropriate, comprehensive sex education passed.

Within hours of the hearing, Reno Gazette-Journal political reporter Ray Hagar posted a story about Flores’ testimony. As far as I can tell, Hagar was the only mainstream journalist to cover the announcement, with his story posting about an hour before my re-cap of the hearing, here on The Sin City Siren. But just days later, local television producer Dana Gentry broke the news that Flores had cancelled her scheduled April 4 appearance on the political news show Ralston Reports after receiving death threats stemming from her abortion story.

I can’t help but wonder if Hagar and I share some indirect culpability in giving greater exposure to the kind of information that has been shown to incite anti-choice news outlets and organizations. But I refuse to let the anti-choicers dictate this news cycle. They would like nothing better than to steal focus from important reforms to Nevada’s current sex education law by throwing this political-grenade into the mix — distracting everyone with a drummed-up controversy about abortion using the age-old tactics of slut-shaming and blatant scare-tactics.

After all, haven’t we been here before, circa 2011, when Rep. Jackie Speier announced on the House floor that she had an abortion? Or when Michigan House Rep. Lisa Brown was silenced for using the word “vagina” while debating a women’s health care bill last year?

The real story here should be about Lucy Flores’ bravery and determination to not be shamed or silenced by the threats of an incredibly loud opposition, who is actually in the minority. Polls show that regardless of religious affiliation or political party, the majority of Americans support comprehensive sex education over an abstinence-only curriculum. And, on this year’s 40th anniversary of Roe v Wade, the Pew Research Center released a poll stating that 42 percent of Americans find no moral objection to abortion, while only 25 percent do (the rest were a mix of other opinions). An NBC Poll that same week found support for abortion rights at an “all time high” with 70 percent of Americans saying they do not want to see Roe overturned.

But while the anti-choice folks have made hay with headlines declaring, “I Don’t Regret Killing My Baby,”* it is disturbing that any person or persons have threatened the Nevada lawmaker with violence. As a Christian and a mother, I pray for her safety. When I tucked my toddler into bed tonight, I hugged her that much harder as I struggled to hold back tears thinking about Lucy Flores, not because we should condescend to characterizing even highly educated, powerful women as simply “somebody’s daughter,” but because Lucy is a fellow human being living with fear tonight. I have empathy for the worry she must feel.

It is this complete lack of empathy that is at the core of the opposition to women’s autonomy, and their access to legal forms of health care, or even the education that can help them establish healthy relationships, healthy sexual experiences, and healthy futures. Rather than live and let live — or even turn the other cheek, as Jesus might say — the anti-choice movement cannot see the humanity in any person not living their life as a man in a heterosexual man’s world. Because if you are anything other than a heterosexual, cisgender man you are cast as unequal, weak, or even deviant. I daresay the only humans who come close to having equality with men in their patriarchal, misogynistic, homophobic, and often blatantly racist world-view are the fetuses they fight so hard to legally classify as “persons.”

So, today, right now, I propose that we show our own personhood, so to speak. I propose that we take the #IHadAnAbortion meme of a few years ago and we publicly stand with Lucy Flores. Regardless of whether or not you have ever had an abortion, we need to stand with Flores and all the countless women she represents. Because she represents many who may be too afraid to come forward with their stories because of the same bullying, terrorist threats that Flores is confronted with right now.

“I don’t regret it because I am here, making a difference, at least in my mind, for the young ladies and letting them know their options. They can do things not to be in the situation I was in, to prevent it,” Flores said at the hearing about her decision to have an abortion. “How do we prevent this? We prevent by education. We prevent by giving them the information and the resources they need, so they don’t have to go their dad and say, ‘I need $200 for an abortion.'”

Today, I am asking you to join with me in standing up with Assemblywoman Lucy Flores. Let’s light up twitter with the hashtag #FierceFlores to honor the lawmaker’s honesty and her work championing the reproductive freedom and education of all Nevadans.

As a survivor of sexual abuse, I understand the power of speaking the truth even when others are afraid to hear it. So often, the only way to end stigma is to end the silence that allows shame and fear to fester. I am not ashamed of being a survivor of sexual abuse. There are many in our society who try to shame me into staying silent. But I am not going to stop talking about it. I speak for myself, and all those who have not yet found their voice. Our stories humanize the experience.

And it is no different for those who have had an abortion. No matter how much the opposition wants to frame it as a moral issue, or force the message that there are only certain kinds of abortions that are okay (hint: rape and incest) that trickles down into a meme that requires women to couch their reproductive decisions in socially acceptable terms. It doesn’t matter what the reason was that someone had an abortion because there is no reason to be ashamed of having an abortion.

Thank you, Lucy Flores, for your act of bravery and speaking out for all those who are silenced. Thank you #FierceFlores for speaking out to make a difference in Nevada! 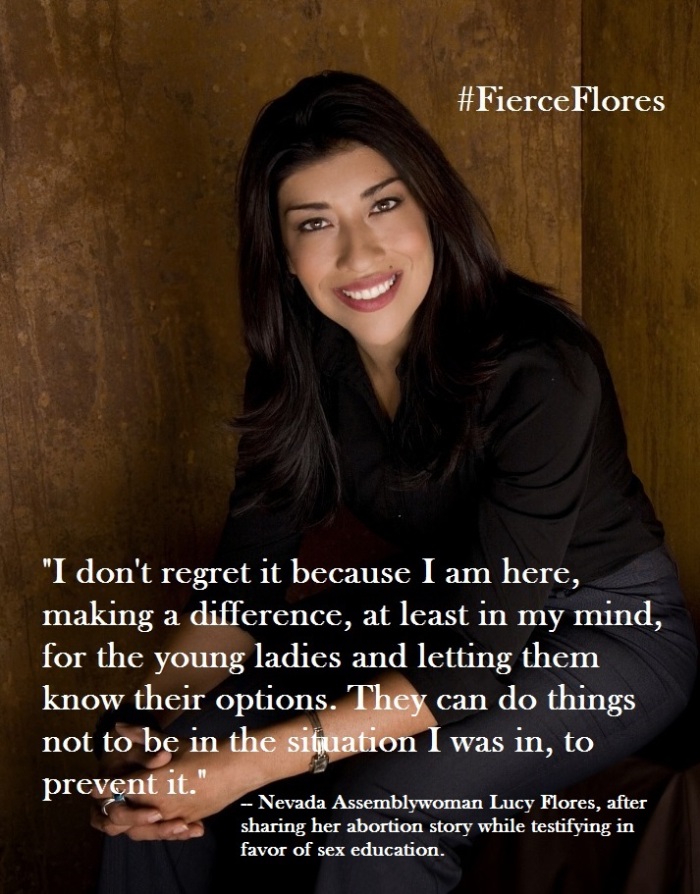 * I do not link to anti-choice propaganda sites. I refuse to give them more traffic.

UPDATE: Because of the unexpected popularity of this meme — THANK YOU FOR SUPPORTING LUCY FLORES! — please be patient with me in approving comments. WordPress locks any newcomers in limbo and I have to go through them by hand. Alas, The Sin City Siren is just a one-woman operation. Be patients, my lovelies!