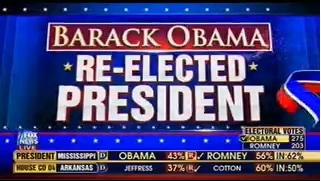 Praise the Flying Spaghetti Monster or whatever deity you do or don’t believe in… this presidential campaign season is all over but the shouting!

And there is good news to report!

Of course, people wasted no time celebrating (or complaining) via social media of the president’s victory. I personally loved Think Progress’ tweet, “Obama Wins. It’s better on Fox News” with the screen-capture (at left).

Not only has President Barrack Obama been re-elected, but we’ve had some very exciting progress around the nation!

Progressive women did well in this election (as well as progressive issues):

And exit polling shows that women came out strong to vote in this election. Indeed, Obama showed a 10-point lead with women nationally. In an election where women’s rights were a central bargaining chip, we showed that we vote! For pro-choice, pro-women voters everywhere, it’s a good day to be an American. And tomorrow we break ground on the next four years and building on the progress, and promise, of this election.

Here in Nevada, a battleground swing state, the results have been more mixed:

There are some real losses here in Nevada tonight. But some good wins, too. And whadaya know… there’s a state legislative session just around the corner — three short months away. I can already hear the shouting…

2 thoughts on “Obama wins! Ding-Dong the Election (Season) is Dead!”