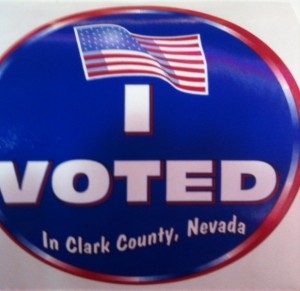 Get Out and Vote!

Tomorrow is Election Day! Hurray! If you did not already turn out by early voting or mailing in an absentee ballot — then get the heck out and vote! (You can find your polling place here.)

Not to repeat myself too much…but I feel it’s just that important. Here are some of the many reasons I hope you will NOT be voting for Sharron Angle:

Okay, so ends my plea for you to NOT vote for Sharron Angle. But maybe you have other ideas or questions not covered here. (There are others running for other offices, after all. And what about those ballot questions?) Or, perhaps you want another opinion (really?). Well, you’re in luck. There are many quality voter guides out there right now. (Sorry, can’t link to that one newspaper’s guide. Don’t want to get sued.)

And here’s some info from the ACLU of Nevada about your voting rights.

3 thoughts on “My final plea: More than a dozen reasons NOT to vote for Angle”