If I took my emotional cues from the breathless excitement of feminists everywhere reporting about Hillary Clinton’s new twitter account, I’m sure I’d have a more inspired headline for this post. I’m afraid all I can drum up is: So, Hillary Clinton didn’t have a twitter account? Um, what? 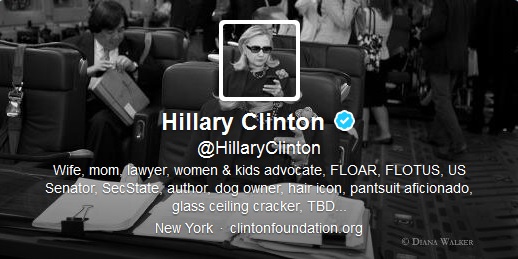 The bespoke former SOS’s twitter bio is funnier than yours.

To be sure, she has one of the funnier twitter bios for a politician, proving that she (or at least one of her handlers) is in on the joke. And I do like that. I like it a lot! I mean, the woman has been pilloried for wearing a shirt a centimeter below the (unwritten) acceptable margin. Her pantsuits inspired more ink than her policies during her bid for president (last time). And god help us if we ever have to endure another news cycle about her fucking hair. And, you know, she’s sort of become our taking-shit (and giving it right back) proxy. I mean, for as many times as I’ve been called a bitch, I’ve never been called a bitch in a viral video while campaigning for president.

I know, there are thousands of people who are waiting to exhale because they are just sure — so very, very sure — that this is the first step in a long ceremony of Clinton unveiling her fooling-nobody, not-secret plans to run for president in 2016.

So, she’s on twitter. I’m guessing that will matter when she’s sent more than just one tweet. So far nearly a quarter of a million folks have followed here — waiting for the next tweet and whatever comes after that …