Even as the Justice Department reports that our nation’s crime labs are processing more rape kits, there is a greater backlog than ever in analysis of potential evidence. Indeed, it is estimated that there are as many as 400,000 untested kits sitting in evidence storage all across the country. Considering that every rape kit represents, essentially, a person, you could almost replace the entire population of Omaha, Neb. (approx. 409,000) with the rape survivors represented by those untested kits collecting dust.

This would be a travesty of justice, if sexual assault survivors were routinely getting justice, anywhere. No, what this is is a monument to rape culture.

According to RAINN (Rape Abuse and Incest National Network), there are about 238,000 new sexual assault survivors every year and only about 40 percent of all rapes get reported. In fact, 97 percent of all rapists will never spend a day in jail. 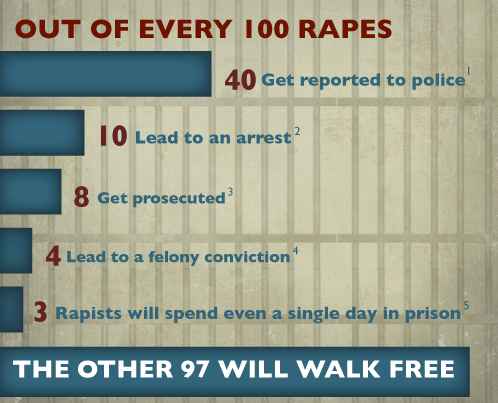 But this is old news. We already know that rape survivors rarely get their day in court. And when they do? Well, there’s a reason why the movie The Accused remains startlingly relevant some 26 years later. A year ago a California judge threw out a rape case because the victim was unmarried. Last month a judge in New Hampshire threw out a confession by a man accused of raping a teenage girl hundreds of times over four years. A Georgia judge threw out a case in 2008 because the victim was not a virgin. And then there’s the Maryville, Mo. case, Retaeh Parsons, the Austin Clem case in Alabama … Then sometimes even when rape survivors “win” they lose, like the Montana judge who handed down a 30-day sentence to a teacher who raped his then-14-year-old student and added that she was “as much in control of the situation” as her attacker. (She killed herself, by the way.) You see, it’s not the rapists fault for raping. It’s you! I can go on for days. Just type in a state name +rape case into a search engine and wait for the litany of rape-culture excuse-making to float onto your screen.

Long story short, it’s bleak out there for survivors of sexual assault. It’s not bad enough they have to survive getting raped? Nah, the criminal justice system just goes on break when it’s a rape survivor’s turn at bat. What other violent crime do you know of in which hundreds of thousands of pieces of evidence just sit on a shelf? Or worse, get thrown away unprocessed — like the 15,000 rape kits (allegedly) thrown away by the city of Memphis. Are you fucking kidding me?

This is a very big deal and is one of the most obvious examples of rape culture in our justice system. The majority of victims of sexual assault are women. In rape culture, rape is inevitable to all women. If you don’t believe me, scroll back a couple of paragraphs. Why would judges routinely throw out rape cases because of personal beliefs — not lack of evidence or other legal issue — such as because women are unmarried or not virgins if there wasn’t an over-arching belief that women deserve to be raped? It is no wonder rape kits — something that could actually provide concrete evidence in a kind of violent crime that often leaves no concrete evidence — just sit on the shelf. Why look for evidence that proves a rape happened in a society that embraces a philosophy that rape is inevitable? But this isn’t some kind of philosophical party game. This is real life! These are people’s real lives.

And don’t start talking to me about budget cuts. Remember, in some municipalities victims are paying for their rape kits anyway. But let’s get real. What are our taxes paying for if not to process evidence in the pursuit of justice?

In fact, one of the biggest reasons law enforcement personnel don’t process rape kits is that they think it is only useful when the rapist was a stranger. MYTH! But also, WTF? Since about two-thirds of rapes are committed by a person known to the victim, that would leave a huge amount of rape kits untested. … Oh wait. … Rape kits are forensic tools to process evidence on a person’s body. Here’s my colleague Soraya Chemaly with 10 more facts about rape kits. So the next time some idiot gets up and says something stunningly stupid — like rape kits can give abortions — you have my permission to tell them to shut the fuck up.

More importantly, where’s the moral outrage here? Screw taking back the night. I want to take back the criminal justice system. I want mandatory training on sexual violence — how to talk to victims; how to collect evidence; and then HOW TO PROCESS EVIDENCE. I know justice is blind, but give me a fucking break!

And there is something we can do here. We can ask questions about how many unprocessed kits there are where we live. In Las Vegas that may be an estimated 4,000 kits. Or how about how many certified rape kit examiners — the person who is certified to officially collect the evidence — there are where you live? I know in Las Vegas there where two and I recently heard there is now only ONE examiner — not one examiner for one hospital; one for the entire Las Vegas metropolitan area. (That includes the famous Strip and the 36 million tourists who come to Las Vegas every year. Food for thought, no?)

Better yet, we can support the reauthorization of the Debbie Smith Act, which allocates funds to test rape kits. Come to think of it, that seems like an excellent place to start.

Want more SCS? Follow me on Facebook and Twitter! Keep up with fresh posts automatically by signing up for free email alerts! Take SCS with you wherever you go with a Kindle subscription!

6 thoughts on “The justice backlog: Why are hundreds of thousands of rape kits gathering dust?”