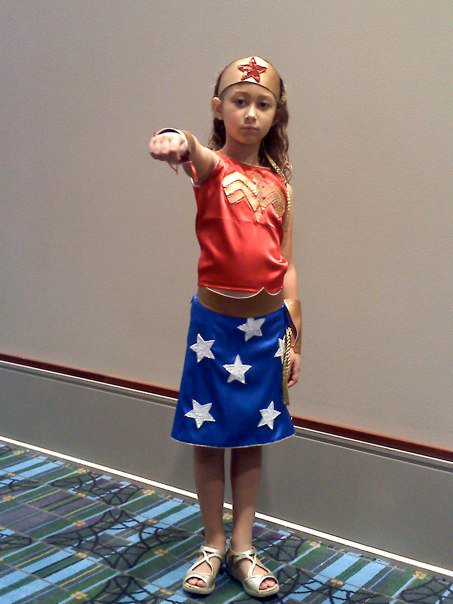 Olivia Harris as Wonder Woman. When asked why she isn’t smiling she said, “Because Wonder Woman doesn’t smile.” Take that street harassers! Image used with permission from Jason Harris.

What did you want to be when you were a little kid? I wanted to be a ballerina until I saw Lynda Carter spin into Wonder Woman on my black-and-white TV. Sure, I had already seen Christopher Reeves as Superman. He was pretty great and all, but the only quasi-strong woman in that story is reporter Lois Lane. And while I did eventually grow up to be a reporter, it had nothing to do with Lois. After all, she was just another damsel-in-distress, a prop to show Superman’s emotional side. But Wonder Woman… Now there was a woman who was smart, fierce, and stronger than any man and never apologized for it. That was a hero to inspire my little heart as I watched breathlessly as she foiled bad guys and saved the world from Nazis.

And that’s when I started begging my mom to buy me comic books.

By now, you’ve probably done the mental math and can tell I was born in the 1970s and came of age in the 80s and early 90s. I’m of that generation. No, not Gen X, although that label probably fits. No, I’m of the Comic Book Geek generation. In particular, the women-who-like-comic-books generation. Indeed, we’re not just here, we’re demanding parity in characters and, at the publishing level, to include more female-created books. And now, as we raise our own children, we feel the friction of a world that has not moved as quickly to embrace strong women as the world of comics, which has come a long way from the likes of the seminal but singular Wonder Woman. Today there are whole teams of female superheros, including a Storm-led team in the Uncanny X-Men. Over at Captain Marvel, Maj. Carol Danvers has saved no less than the galaxy and led The Avengers.

It’s been a somewhat uneasy relationship for women in comics, not unlike the real world for women in a patriarchal society. There are many female characters that came into their own in the 1970s and 80s including Jean Gray/Phoenix, The Dazzler (a personal favorite), Barbara Gordon/Batgirl, Ms. Marvel, Hawkwoman, and Black Widow. The 90s brought in characters like Xena the Warrior Princess, Tank Girl, and the animated Powerpuff Girls, not to mention Buffy the Vampire Slayer, which successfully jumped from movie to television to comics after the show ended. In the modern era, we’ve seen both heroes and villains who are women portrayed with vacillating levels of real or pseudo-feminist characteristics and sexist tropes. We can see this play out in the not-quite fully actualized character of Pepper Potts as conceptualized in the Iron Man movies and contrast it with Anne Hathaway’s Cat Woman in the last Batman.

So with this growing wealth of self-actualized (or at least progress toward self-actualized) women in the comic book universe and an ever-growing legion of female fans, it is a wonder that parents of girls are still struggling to outfit their tiny heroes. In my own home, my toddler is infatuated with all things Spiderman (just like her dad), Batman, and pretty much any character that appears to be a superhero. (Although, to my chagrin, she is a bit apathetic to Wonder Woman, which she thinks is me. So, any compliment that might be taken as is immediately diminished by the fact that she thinks her mom is not that interesting.) She loves playing with her Wonder Woman invisible jet and Batman workshop, both from Fisher Price, equally. And last Halloween, at the last minute (of course), she shrugged off the Elmo costume she had originally picked out and opted instead to wear her Spiderman pajamas to go trick-or-treating. Because she loves Spidey so much, it has forced a kind of gender discussion early in her young life. We routinely have to travel to the “boys” section to find clothes and toys that suit her fancy. In turn, she is routinely called a boy, which is not an issue for me but one I find interesting in a sociological and feminist-perspective way.

How is that when a child chooses to not wear pink, that decides her gender identity? How is it that in an age when there are more and more female heroes and villains in the comic book world, there are still such static labels on who should be the target audience?

A lot of times I can shrug it off or even welcome the conversations that my daughter’s clothes may spark as a micro-level teaching opportunity about construct of gender and about letting children just be kids, without labels, free to choose the apparel and toys that suit their spirit. Why box a kid in (or out)? Why limit who that child can be? One could argue that even by the mere fact that my husband and I call our child “daughter” we have already labeled part of her identity. But at least we’re trying to crack the door open and take away as many boxes as possible.

All of this has been a kind of prelude to one of the biggest disappointments in my daughter’s young life. On the cusp of turning three, my child is deep in the potty training phase. And as any parent knows, you want that process to go as smoothly as possible. It’s a big change in their young lives. It’s a time of liberation and learning that you have control over your body and also about fears (toilets are loud and scary) and anxieties (feelings of failure when having an accident). We want to help our kid through this process as guides and also as partners in her growth and learning.

One thing we read was to get your kid excited about potty training by taking them to buy their first underwear. So, I took my daughter to the store. She was very excited to see all the underwear, “just like mommy and daddy.” She’s not into princesses, yet, so most of the girl-branded pink underwear weren’t that interesting to my kid. What she really got excited about — like jump up and down in the aisle excited — was the package of Spiderman underwear. It was marketed to boys and sewn with the boy-style flap. But I bought a package (along with a “plan B” style, just in case). I wanted my kid to feel excited about potty time. And I wanted her to feel like she had control over her life in some small way. She could choose her underpants! (Which is really saying something, considering the gender-coding of the diaper aisle, which is almost exclusively branded out not just in shades of pink and blue but corporate characters that intensify that gender-coding.) Sadly, when my kid tried the Spidey underwear on, it just didn’t feel right. And it upset her. She didn’t want to put on the plain green, blue, or pink underwear. She wanted Spidey.

I took to internet, scowering hand-made websites like Etsy, auction sites, mass-retailer sites. I posted to all my social media sites. I was a mother on a mission! All I found was that a lot of other parents — and I mean A LOT — have the exact same problem. (Going the other way, too. With parents of boys wanting princess or “girl” themed underwear.) This was a real capitalism-fail moment. The demand is here! So where is the supply? I immediately signed the petition, which was started by another mom of a girl who loves Spidey.

So, maybe that’s why I was so excited to see this female superhero meme started by artist Alexandra Law, who finds pictures of girls dressed as superheros and turns them into comic book-style drawings of bad-ass characters. Isn’t that what it’s all about? Don’t we want every kid to see themselves as awesome superheros, with powers that amaze and delight? Isn’t that what my daughter wants when she puts on her Spidey costume? Or when she throws on the Batman rash-guard with a pink tutu to go to the water park?

As we celebrate Mother’s Day, I wish that the kids in our lives can be their true selves, explore their world without judgement, and be celebrated for who they really are and what they really love without shame. Because all I want, for Mother’s Day or any day, is for my kid to be happy. And maybe a pack of Spiderman undies for girls, size 4T. Thanks.