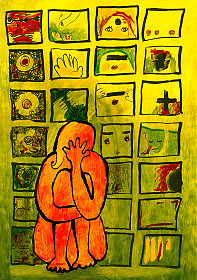 An interesting sidenote: When searching Getty Images for "menstruation," only negative images came up.

Earlier tonight I was in a room filled with women who were all talking about one thing: menstruation. Sounds like every guy’s worst nightmare, right? Well actually, it was by turns funny, insightful, inspiring, and frustrating. And no men were hurt in the process. See? We come in peace. Or rather, we menstruate in peace. (Hee hee, I couldn’t help myself.)

The event was the Vagina Warrior’s First Annual Vagina/Period Party, held at the Center for Social Justice at UNLV. The evening was moderated by presenter Visher Redmond, who offered a thought-provoking presentation about all things menses — from the celebration of the onset of menses by the Navajo people to the ostracization of women as tainted and unclean in many other cultures (even in present day). There was discussion about personal hygiene products and alternatives to conventional brands (check out a classic SCS post on the same subject). There were even slides of paintings one artist made using her own menstrual blood. Now that’s taking the idea of celebrating your womanhood to another level!

This short film about the Navajo celebration of a girl’s first period was very interesting:

Maybe it’s because I am now the mother of a daughter and I will one day have to navigate helping her cross the threshold into womanhood or maybe it’s because I still get my monthly “visit from Aunt Flo,” but the event did make me consider some long-held feelings and truths I have about the female body, body shaming, and a cultural aversion to gynecological issues. I’m not saying I want to shout from the mountaintops how much I love my period, but it did give me pause that having a negative attitude about it does transmit a certain idea about womanhood to my little girl.

Should we be shunning a regular and natural part of ourselves to placate a cultural paradigm that we had no part in creating? Or, to put it another way, are periods really that gross?

This got me thinking about something that happened with my daughter recently. Like a lot of one-year-olds, she’s at a stage where she is constantly trying to get her diaper off. This is very common (albeit highly frustrating for the adults in her life) and a phase that is also often accompanied by body exploration. Something that happens a lot — and this will sound familiar to anyone who is or has been the parent of a toddler — is that she wants to put her hands inside her diaper or will try to put her hands in her soiled diaper during changes. This requires some precision work by the diaper-changer, of course. You’re already handling a dirty diaper. You don’t want smeared poop involved.

So, the other day I was changing her diaper and she almost got her hand in some poop. I grabbed her hand quickly and said, “No. Dirty.” This is something she is used to hearing in other situations, like touching garbage or trying to grab dog poop off the ground. The concept is simple enough: Don’t touch things that are dirty. I have a friend who used to say, “No. Caca,” to her kids. Now, when I said “No. Dirty,” to my daughter the other day I was referring to poop being dirty. But in that moment, I had a little epiphany: Is this where it begins? Is this where Genitals = Dirty comes from? That was not my intention, of course. I would much rather my daughter feel about herself the way another friend’s daughter feels about her genitals, which we all learned when she proudly told us, “I love my crotch.” But how does my 17-month-old navigate the complex social nuances of language and development? Maybe she thought I was trying to tell her that her crotch is dirty. Maybe she totally got that it was about poop. At this point, it’s anyone’s guess. I will say this: I’m not going to use that phrase in that way again.

Now, you might be thinking, what does baby poop have to do with menstruation. It’s simple, really. It’s all about the messages that females get about how they should feel about their bodies and their gender across the entire spectrum of their lives. At some point in her life, my daughter will encounter the societal concept that her genitals are dirty and her sexuality is to be feared. At some point in every woman’s life, she has been made to feel ashamed of her menstruation, which is an intrinsic function of womanhood. Somehow, to me, the fact that shame is attached to femininity in our society seems connected in these experiences. And many, many others.

I think it’s pretty safe to say that I am not going to start celebrating my period every month. But I, and all women, could do with less shame about our bodies. So, thank you Vagina Warriors. I’m already looking forward to the next party!

Cross-posted on The Tired Feminist.

One thought on “Going with the flow”