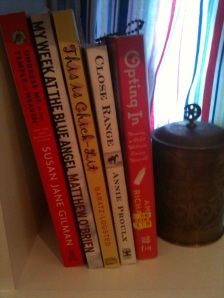 It’s time to pick the next selection for The Sin City Siren Book Club! I’ve taken your feedback and I hope this next batch grabs your interest.

While I didn’t receive very many book title suggestions, the main feedback seemed to be “more fiction, please!” As it turns out, I’m really into non-fiction. So, I’ve tried to offer a balance of the two forms. And, of course, I do have a thinly veiled agenda: to have interesting discussions about feminism, LGBT issues, poverty and other progressive issues. So all the books have at least an indirect opening for discussion along those lines. And since we’re heading into the holiday season, many of the options this time are short story collections, which may be easier to digest in the time-pinched holidays.

Here are the book club contenders (in alphabetical order):

I’ll announce the winner on Monday, Nov. 29 and set a date for discussion in mid-January.

3 thoughts on “Choose or Lose”