I couldn’t keep away from the keyboard after reading local writer Steve Friess’ Las Vegas Weekly column on Pride Week. I know I’m going to upset some people by saying this, but the column made me want to give Steve a hug and thank him for his honesty. It’s the brave thing to do. And it’s real. And it is how many people (whether they are the majority or a minority, I don’t know) do feel.

Before everyone gets mad at me for agreeing with the gay guy who’s saying he’s not that into Pride Week because he doesn’t have anything in common with its themes and activities, give me a chance to explain why. As Steve says in his piece, he was once a very active member of the local gay scene, organizing events, attending events, having fun and whatnot. Then, over time and as his life changed, he had less and less time for the party-heavy scene and eventually realized that he didn’t have much in common with the scene he was once very much a part:

Not surprisingly, the entire gay “scene” ceased to interest me. I remained interested in gay civil rights and gay media issues, to be sure, but I also I became alienated because I just always ended up with a different take on things.

And here is where I feel more than a couple inches of common ground with Steve. 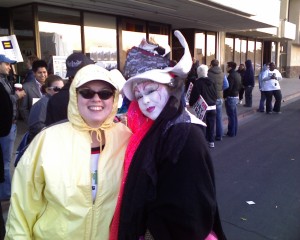 For one thing, for the past 15 years I’ve been a part of or an organizer of different events and meaningful moments in the LGBT communities where I’ve lived. I am not saying, nor would I ever say, that I am the most important organizer in the different scenes where I’ve lived or that I have done more than anyone else. That would be absolutely untrue. But I have participated and there have been times that my participation has been quite impactful. As a reporter I was often the only staff writer at the papers where I worked who would fight to cover LGBT events and would also stick my neck out to fight to make sure others who covered LGBT events or issues did them with the right sensitivity and language. (I am not saying that others I worked with did not care about these things or were all insensitive idiots. But there were also idiots. And I did at times have editors who were ignorant or even homophobic.) So, there’s that.

But in all this time, I have rarely talked about why I feel so invested in the equality of the LGBT community. Sure, I fight for the equality of all people. I’m obviously a feminist, so I work toward the equality of women. And being a woman, I certainly have experience feeling oppressed, harassed, discriminated against, marginalized and so on. That’s the shared camaraderie of oppression. But there’s more to it for me than just that (which would be enough). I am also bisexual. You probably didn’t know that.

Of course, how could you since I hardly ever talk about it, even amongst friends and loved ones. In three years, I’ve never mentioned it on this blog before. But I used to talk about it A LOT. I used to be the only out bisexual on my entire college campus (at the tiny university I went to outside Chicago for one year). I was the only out bisexual who would talk about it at the speakers’ bureau my local LGBT group started. I was all there was. It was lonely as hell. And I had to be brave as hell, even when people slipped nastygrams under my dorm door and made threatening phone calls in the middle of the night. I was harassed and the security guards agreed with the homophobes. And more than I would have ever admitted back then, I was afraid. But I was still out, damn it!

As time went on and I changed schools and moved to a community that was wholly more hospitable, I had an easier time being me, which included my sexuality. I had a boyfriend (now my husband). And when I went to my local LGBT community center and talked to the director about how I might be able to get involved, I was promptly shown the door. That’s not a metaphor or artistic effect. That’s a fact. She told me that bisexuals who date men are “just passing through” and the only way to be a “true bi” was to date women. (I thought this was a weird definition since that basically meant the only way to be a bi woman was to be exclusively lesbian.) She told me that there was no place in her center for someone like me. I was hurt. I cried. I got angry. And for a while I opted out of the movement. But I still cared and eventually got back into the scene where I was living in Oregon.

More time went on. I got engaged to my boyfriend. And when I came out to some women I worked with at the campus women’s center, they told me they did not believe me. How could I be bi? I was marrying a man! Sigh.

Even now, it’s been made very clear to me that there’s just no room for someone like me in the local scene. Or, as a prominent local lesbian once said to me, “I was bi for a long time until I woke up and realized I didn’t like dick and I wasn’t going to have anything more to do with it ever again.” If that’s your journey and your epiphany, good for you. I’m happy you got to where you were going and are in a place of fulfillment, joy and are finally living a self-actualized life. But that’s not my journey.

You see, the trouble with being bi is that you don’t fit in to a binary system (pardon the semi-pun) of gay or straight. No matter your gender, people only “believe” you if you are dating someone of the same sex. But at the same time, people from both the gay and straight worlds also have an overwhelming tendency to believe that bisexuality is a “passing through” identity. I find this to be and have always found this to be incredibly insulting, dismissive, condescending and unfair. When did you discover your sexual identity? When did you realize you were gay (or whatever you are)? How did you know for sure? Guess what — I had the same kinds of experiences that led me to realize I am bi. I’ve known it since I was in junior high. I will always be bi. That’s a part of who I am. Even now, that I will celebrate my 13th wedding anniversary in June (with my male partner) and have my first baby in about three weeks — these things do not make me un-bisexual. These things do not make me straight just because that is a more convenient label for you.

And this brings me back to Steve Friess’ article, which I love. I have not had the same experiences as him but I feel I can relate on some level. I used to be much more open, out and proud about my sexuality when I was in school in Illinois and Oregon and even when I first moved to Las Vegas. But unlike many of my gay friends, I felt that I could never be out as a reporter and I never was. And as people have gotten to know me in Las Vegas, they have just assumed I’m straight (because I’m married, I think) even when I was working within the gay community toward LGBT equality. And the few times I’ve come out since I’ve been in Las Vegas it has been met with the same old story I’ve always had to deal with. And I don’t care to educate you anymore. Frankly, I don’t think anyone in the gay community is listening. And aside from wanting to hear racy stories (because clearly, all bisexuals are promiscuous and full of racy sex stories), the straight community could give a shit as well.

I know this is the not the same sentiment that Steve has. I know his reasons are different than mine. But on the fundamental level, I appreciate what he is saying about moving on in his life. You define yourself for yourself and everyone else be damned! And I know that my activist work and my blogging has not always been met with praise from many parts of our Las Vegas community over the years. You don’t always agree with me or have things in common with me? Back at ya.

And that sort of gets me to the second big reason why I feel a kinship with Steve’s column. It’s not just the LGBT community that gets fractured or has these kinds of chasms. I’ve seen this all over the feminist and prochoice community for all the years I’ve been working in it. We’re not all the same just because we have some things in common. We’re not always going to agree or get along just because we have a shared experience of oppression. What I wish would come out of that is at least a shared respect that regardless of our personal tastes or how much we do or don’t want to go to a party, we at least agree on the core principle that we need to work together to make things better. That doesn’t always happen. But I keep the dream alive.