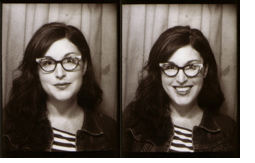 If you’ve ever picked up a copy of Bitch Magazine, or in recent years shared one of the many viral-worthy posts from its Bitch Blog, you can thank Andi Zeisler. The former Sassy intern — a legendary publication to many in my generation — started Bitch with co-founders Lisa Jervis and Benjamin Shaykin back in 1996 before the internet was ubiquitous and back when folks like me were spending long hours in copy shops making hand-crafted zines. For seventeen years the media organization been an outpost for passionate, feminist discussion and a critic of pop culture.

The very existence of a mag like Bitch, overtly infiltrating the sea of homogenous fashion and entertainment rags, is like feminism is planting a flag on pop culture every month — asking no one for permission to casually subvert the paradigm on magazine racks across the country. There is no question that feminist media, like The Sin City Siren, owes a debt to Bitch for paving the way. Bitch has stayed open largely thanks to its loyal fan base, which continue to keep the lean organization afloat through donation drives and subscriptions (which make fabulous holiday gifts, by the way). And while Bitch doesn’t eschew advertising completely (ala Ms. Magazine), it has been a leader in using a critical eye and editorial discretion.

Reading about folks like Zeisler has a way of making me feel under-ambitious and under-achieving, but in real life she is very encouraging of fellow feminists in the trenches. When I met up with her at a coffee shop in Portland, Zeisler was warm and engaging and just as easily commiserated with me about motherhood strife (because we all have some!) as about whether or not discussions in the online feminist sphere were moving the conversation along or helping it to stagnate. I am happy to report, Zeisler is every bit as funny and intimidatingly smart in person as she is in her writing. But I felt another kind of kinship with her as we talked — feeling tired and a bit beaten down by so many years in the trenches. My sense is that she is as ready as I am to not only encourage the next generation but restless for them to take on their share of the heavy lifting.

Perhaps that’s why Zeisler agreed to answer five questions for the SCS Q&A, which she responded to via email:

I’m reluctant to say there’s a most pressing issue; there are a number of issues that are equally pressing. But I do think the retrograde movement of American politics and political rhetoric as it pertains to women and reproductive rights and justice is crucial, inasmuch as bodily autonomy controlled by law is connected to women’s larger status in the world. The fact that women’s bodies have long been a bargaining chip in politics—and have become alarmingly more so in the past six or seven years—reflects the reality that way too many people are still threatened by the very idea of women and girls being able to control their lives and define their worth on their own terms.

The journalism industry is undergoing a major transformation right now. Bitch Media has managed to evolve with the times in a rather seamless way. How important do you think feminist media is in the feminist movement? And how do we move traditional media to better understand feminist principles?

Well, because advertising has never been a big priority, Bitch has been able to avoid a lot of effects of mag-industry downturn that led to other magazines folding. On the other hand, because we’re such a small and underfunded operation, it’s also been hard for us to evolve as fast as we need to with respect to new technologies. So there’s a trade-off there.

Independent, non-corporate media is crucial to all progressive movements, but with feminism it seems especially crucial because feminism is so often sidelined in other progressive media for the good of the “larger” fight — e.g., once we’ve resolved the issue for the progressive movement, then we’ll get to women’s concerns, then we’ll get to the concerns of people of color, etc. So many journalistic entities that operate as “progressive” replicate, often inadvertently, the hegemonic structure/functioning of the media they’re supposedly alternatives to.

So yeah, feminist media is crucial. And traditional media is catching on to this, certainly more now than it has in the past. It’s still considered a dirty word or a fringe identity in, say, mainstream broadcast news and entertainment, but there are some mainstream magazines and other media that are no longer shying away from explicitly discussing sexism in media. I wouldn’t say huge strides are being made, but here and there it’s visible. I think it’s partly a question of audiences being vocal about wanting those perspectives—and being equally vocal about commending the outlets that provide it. And then, of course, the other part has to do with who is creating that media and their willingness to advocate for those perspectives.

As someone who has been in the movement a while, how has your own feminism evolved over the years?

I considered myself a feminist when we started Bitch, but my frame of reference was pretty small and largely academic. I’ve learned so much from others—Bitch readers and contributors, people I’ve met on listservs and conferences, friends, other writers, and especially critics. I don’t know if I can easily sum up how my feminism has evolved, but I guess I’d say it’s become a lot deeper, more nuanced, more intersectional, and in some ways more personal—which makes sense given that I’m more than 20 years older than I was when I began identifying as feminist. It was interesting to me, for instance, that I had a few people ask me if my stance on abortion changed when I had a child, like all of a sudden the wonder of pregnancy would make me realize that all babies needed to be born. That was incredibly weird. If anything, parenthood has made me about a thousand times *more* adamant about choice.

What advice do you give younger feminists coming up in the movement today?

The advice I generally give is to find something you’re passionate about and really dig in to it. Learn everything you can about it, read everyone else who’s writing about it, and find a way that you can contribute meaningfully using your strengths and your knowledge while honoring what work is already there. There’s a lot of reinventing the wheel that goes on as new generations come to their own realizations and learning about feminism and activism, and I’d argue that while that is necessary, knowing the history of issues is as important as reacting to them.

Pretending for a moment that you have a crystal ball, where do you see the feminist movement — or perhaps society as a whole — going next? What are your hopes and/or what is the reality?

I don’t know. This is the place where I tend to get a bit pessimistic. The feminist movement has been co-opted in so many ways: The language and the aims have been warped and misrepresented by mainstream media and right-wing adversaries, and obviously the idea of feminism itself has been turned into a marketing pitch for diets and products and a thousand other things. I don’t know that that’s going to end. But on the other hand, things like social media and online campaigns have been transformative, and have shown that literally one or two people raising their voices to push back can have far-reaching consequences—they can get a sexist ad campaign quashed, or a news frame corrected, or simply get people thinking about how we define feminism in the first place.

When I think of where the public dialogue around feminism was when we started Bitch in 1996 and where it is today, it’s a massive, massive change for the better. It’s more diverse and more complex and more challenging and more out in the open, and that’s nothing but positive. But within the movement, we don’t necessary have control over how big-F feminism is viewed or treated in the larger sphere. And I see that as definitely a problem that’s not going away, no matter what happens among self-identified feminists.

Andi Zeisler is co-editor/creator of Bitch Magazine. Check out her book Feminism and Pop Culture on Seal Press. Tweet her at @andizeisler.

Is there someone you’d like to see get the SCS Q&A treatment? Submit your ideas and nominees to me via comments or tweet me @TheSinCitySiren.