This year marks the 40th anniversary of the landmark Roe v Wade Supreme Court decision handed down on Jan. 22, 2013. The case validated a woman’s right to privacy, a right guaranteed by the due process clause within the 14th Amendment.

Perhaps it is no accident that it is the 14th Amendment — the very same that provides a broad enough definition of citizenship to overrule the Supreme Court’s (1857) Dred Scott v Sanford ruling that black people could not be citizens — that set a precedent for women’s reproductive rights in America. After all, at its core, the arguments against women having access to abortion are predicated in a mindset that has determined — whether consciously or not — that women are not actually capable of making this medical decision for themselves. (Or doctors, for that matter.)

According to the Guttmacher Institute, seven in 10 Americans getting abortions report a religious affiliation. Catholics have abortions at a slightly higher rate (22 per 1,000) than Protestant women (15 per 1,000). As a feminist Christian myself (we do exist), I feel that my religion has been hijacked by a loud, strident minority who sometimes employ terrorist tactics. Because make no mistake, bombing clinics and killing doctors are acts of terrorism. But so is telling a woman that her only value in life is to be an incubator for a fetus!

The anti-abortion side wants to frame the argument as one about morality, religiosity, and a belief that life starts at conception. But this framework is a straw man: The argument is defined by usurping the humanity and value of a woman with that of a fetus. If we are to judge the antis by their actions — lobbying for feticide and personhood laws — it is not merely about “saving a life.” Because in many cases, the only “life” they are trying to save is that of a fetus. Every time a woman’s actions during pregnancy are criminalized by a feticide law; every time someone argues that a cluster of cells has the same civil rights as a fully formed person (does that mean a fetus has the right of eminent domain over my uterus?); every time something like the Let Women Die bill passes one of the houses of Congress, it is just further evidence that the anti-abortion movement is not about saving lives. It is not about helping people — already born people anyway. And it is certainly not about helping babies born into circumstances beyond their control like poverty, illness, addiction, mental health issues, conception by rape or molestation, or for the death of a mother who could not live through a pregnancy.

And while we may not like the moniker of the War on Women, in recent years there is no denying that the anti-abortion side has been on a roll. There were a record number of anti-abortion bills enacted in 2011, according to Guttmacher.

In fact, laws past in recent years have included Utah’s 72-hour waiting period (the longest in the country), Arizona’s court-challenged 2012 law that starts counting gestation two weeks before conception (huh?), and an increase in abstinence-only “education” (despite its widely publicized failures and the fact that most parents support comprehensive sex education). And we haven’t even talked about ultrasounds, transvaginal or otherwise.

All of these laws and campaigns have one thing in common: They do not show any respect toward women. There is no compassion. They are here to strip us of our humanity and dignity, even if it takes another 40 years. In fact, the one thing these bills and laws have in common is their laser-beam focus on dehumanizing women and forcing them into increasingly humiliating and unaffordable circumstances.

Forty years later and the nation and (mostly white male) legislators are still trying to pry open women’s legs and peer into that private reproductive space inside a woman.

The antis may be winning the battle against abortion providers and enacting a record number of laws, but women are still having abortions: 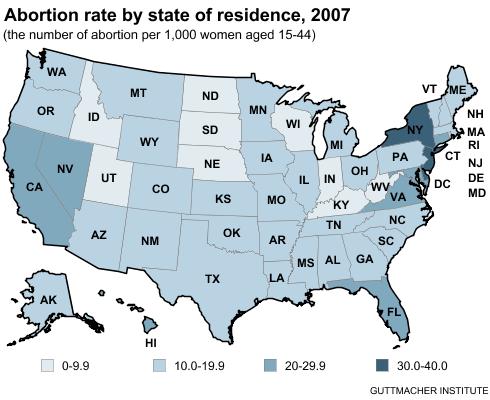 However, what the opposition has done is effectively create a caste system when it comes to reproductive health care. While white women have more abortions (at 36 percent compared to African-Americans, 30 percent, and Hispanics, 25 percent) women of color and poor women are disproportionately more likely to have abortions because of a higher rate of unintended pregnancies, according to Guttmacher Institute. This stems largely from a lack of access to contraceptives, affordable health care, comprehensive sex education as well as a higher level of poverty among people of color.

This video breaks this down well (share it with your friends):

The thing is, women who can afford an abortion will always be able to get one. They will be able to afford to travel the long distances in states with only one or two abortion provider(s) (or none, if things go sideways in Mississippi). Or cross state (or national) borders to obtain an abortion. (Only 13 percent of all US counties have an abortion provider.) For the women who can afford the average cost of $451, time off of work, childcare (6 in 10 are already mothers), transportation, waiting periods, costs of additional testing (ultrasounds) and/or state-mandated counseling, abortion will be available.

But what about the other women? The poor women, a demographic whose unintended pregnancy increased 50 percent between 1994 and 2006 while unintended pregnancies went down by 29 percent for higher-income women. The women of color, who are at the center of a propaganda campaign that links abortions with racism. Antis who continue to spread the mythology that abortion doctors are racists attempting a long-con genocide are blind to the reality in which they are complicit in a socio-economic framework that systematically oppresses women of color by, among other things, denying them affordable access to quality health care.

No wonder Planned Parenthood has announced that they will be dropping the “pro-choice” terminology from their campaigns to keep women’s health care safe, affordable, and available to all. Because, let’s face it, for many women there is no choice involved. Whether for reasons of cost, social or religious stigma, or simply not having access to a provider at a reasonable distance, many women find that the choice to have an abortion is not on the menu.

Forty years into the age of Roe, and I have to wonder not only where the privacy has gone, but just how low the anti-abortion movement is willing to go. A lot has changed since 1973. Gone are 8-tracks, rotary phones, and rabbit ears on TVs. We’ve seen so many advancements come and go from betamaxes to laser discs to the Apple II. But in all this time, this one issue has remained a constant, a defining boundary of a woman’s autonomy. What other organ, system, or process in the human body is as heavily regulated or heavily debated as that of a woman’s reproductive system? As long as I am defined by how, when, or if I use my uterus, my cultural marker as a second-class citizen will remain — writ large on the American psyche.

If Hester Prynne had to bear her stigma with the Scarlet A, surely we women are all branded with a bold W, a reminder that we are not only women but can at any time be shamed as whores for simply speaking our minds.

There is an irony here about all this public discourse about abortion — and by extension the entire female reproductive health gamut. Even as we shame legislators for using medically accurate terms for female anatomy, the unwritten rule is that women are public property. Even as the Supreme Court has ruled that we have a Constitutionally protected civil right to privacy, there is no private space for women. We are branded sluts when we use contraception. We are branded sinners when we make medical decisions with which some don’t agree. (And I haven’t even mentioned those who don’t fit into traditionally defined gender norms, such as those in the LGBTQ community.)

Every inch of our lives is measured in the public sphere by a ruler that marks not time but reproductive cycles.

After 40 years, the debate rages on. And don’t be fooled. This debate is not about fetuses. This debate is about whether or not women are people. Perhaps what we need now is our own Dred Scott case, in which women are at long last recognized as deserving our full humanity and full autonomy over every aspect of our lives. And to be able to live, work, and govern our lives privately.

6 thoughts on “40 Years of Roe: Choice in a post-choice era”